This tutorial is a continuation of the part 1. Here I will show how to set up the compiles files from TravisCI for the analysis of Coverity Scan.

While the official TravisCI Integration guide provides all the necessary information on how to perform it step by step, I will concentrate only on the parts that needs special attention, or things that caused me some trouble.

To recap, these are the generic steps that needs to be followed for an initial set up:

After doing the above steps, we are now ready to do final edits of the .travis.yml file.

Most of the yml file will remain the same, and we only need to specify what are the build and pre-build commands of the Coverity.

For the pre-build part, we need to specified a compiler type and the version. It is so that to avoid a warning when no files are emitted for the Coverity analysis. For the build part, we use the make command - same way as when we do builds for TravisCI. As a result, this is how coverity_scan addon looks like:

The further steps of .travis.yml remain the same: before the install, installation and before script. For the script part, now that we send the files for Coverity scan with its own build command, we do not need to proceed. To avoid re-running the make command once again, we check for a git branch name, and if it is coverity_scan, we exit:

Unfortunately, Coverity Scan does not allow scans for test projects, so I could not keep the project at my Coverity Scan account. As a proof of the concept, I only have this screenshot: 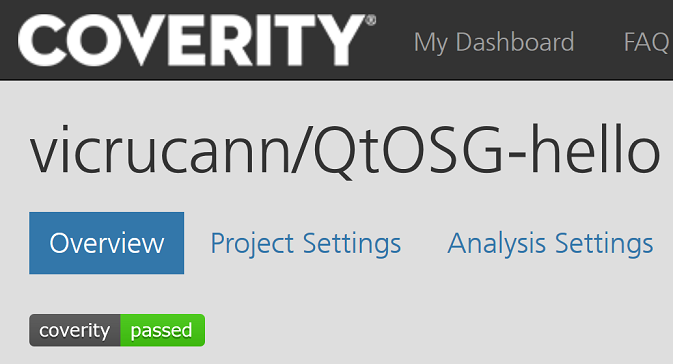 One of my bigger projects rely on Coverity Scan for defect search, so I put a link for that project here too: